I turn 50th this year. In lieu of presents, cake and gasp, even beer, please give everyone the gift of cycling by making a donation to or becoming a member of the British Columbia Cycling Coalition.

For half of that half a century, I’ve had the pleasure of working with many of you to improve cycling around Vancouver and BC through HUB, BEST, Canada Bikes and the BCCC. Working with political leaders and staff in all levels of government, we have had many successes. From wider sidewalks on the Lions Gate Bridge and the Ironworks Bridge, the Bicycle and Pedestrian Path on the Canada Line Bridge, to the Central Valley Greenway. All told, these improvements total around $70 million.

While there are many reasons why I work to move cycling forward, what I find most rewarding is seeing more and more people cycling. Especially families with children.

Still, there is much to do. BC is a large province with great potential.

We need cycle tracks along main streets so people can safely and comfortably cycle to shops, cafes, restaurants, offices and other businesses. More and more homes are being built along major streets. As well, in many cases, there are not convenient direct side streets nearby making separated bike lanes the only option. We are working with Streets for Everyone to secure funding for a pilot grassroots campaign on Commercial Drive that will serve as a model that can be used in communities around the Province.

We need safe connections between communities for locals and tourists. At least wide shoulders free of debris and preferable paths separated from high speed traffic.

We need to improve the Motor Vehicle Act or even better, replace it with a modern road users act that makes the safety of people cycling and walking the priority. Key changes include removing the requirement to ride single file allowing you to legally ride beside friends and families and a safe passing distance law.

We need improved standards for paths and roads ensuring that obstacles are not placed on or near bicycle paths, that fencing and railings do not cause crashes or serious injuries and that shoulders are wide, well maintained and kept clear of hazards.

We need improved and expanded education for people cycling driving. This October, in conjunction with the BCCC Conference in Victoria, thanks to a grant from the Capital Regional District, we are hosting a Bike Sense workshop to review educational material and plan the expansion and improvement of educational efforts.

We need increased funding for cycling. With a Federal election coming up next year and infrastructure spending a key election issue, we have the opportunity to ensure that improved cycling and walking networks receive the funding that is required so that every Canadian has the freedom to chose cycling or walking for recreation, transportation and vacation.

We need need to build stronger more organized cycling community across the Province to encourage leaders to make commitments to improve cycling and to provide the grassroots support they need when they show leadership in moving cycling.

We need your support to make this all happen. As the BCCC not a charity, we can’t issue tax receipts. However, that means we are not limited in the amount of money that we can and will devote for advocacy.

I look forward to continue working with you over the next 25 years making this beautiful province a great place for people of all ages to enjoy cycling.

Thank you for your great work and support. 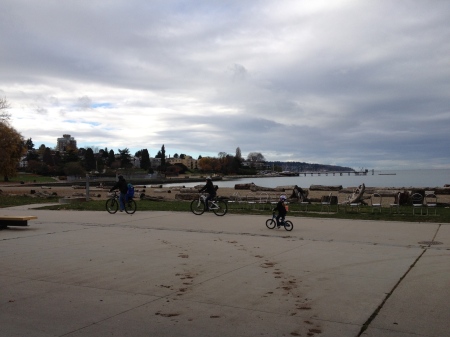 Cycling is one of the most popular forms of recreation enjoyed by residents and visitors of all ages. By Science World, over 5,000 people cycle past on a nice day. As with all the paths by the water, many people cycle along Kits Beach with their children. Sadly, with even neighbourhood streets having fast moving traffic, these paths are the only places many feel safe cycling with their families.

With the Seaside Greenway improvements further west along Point Grey Road due to be finished soon, most likely many more people will want to cycle and walk along Kits Beach making the path even more crowded. The rough path worn in the grass is a clear sign more space is needed.

Sharing the narrow path along the beach and through Haddon Park is not great for people walking or cycling. When passing, riders should let walkers know by ringing their bell or with their voice. But when there are so many people walking and cycling, the constant bell ringing and “on your lefts” can be very annoying for everyone. People also like to walk side by side chatting in groups of 3 or 4. That just is not feasible sharing a narrow path.

It is people that make an urban park. Many of those people enjoy activities on paved and cement surfaces. Yes, grass would look nicer than the tennis or basketball courts but without the tennis and basketball players Kits would not be the same. It would lose part of what makes it exciting, vibrant and attracted; people.

The survey of people using the park, found that 42% of people cycle in the park and 93% thought that separated cycling and walking paths would be a good idea. The planned cycling path will only occupy around 3% of the total park space. As so many people cycle and walk in the park, this seems like a good use of this space.

The City’s Physical Activity Survey found that 20% of adults cycled on a regular basis, 5% played tennis. Basketball did not make the top 18. For children, biking was at 10% while basketball was at 16%. Tennis did not make the top 21. Surely if space can be made for these activities, the same can be done for cycling.

I’m one of the lucky ones who live near the beach walking down there pretty much everyday. Most people are not so fortunately. Given that only so much parking near Kits Beach, cycling is one of the only options that many people can realistically use to get to the beach. Judging by the large number of bikes at the beach, many people do just that. More people cycling instead of also decreases the impact on the neighbourhood and the chances of people driving, walking or cycling getting injured in a crash.

There are many options to significantly or reduce the net amount of grass lost in the park. Part of the path could be placed on Cornwall or Arbutus Streets. Parking space in the park can be reclaimed. Some of the existing paths can be narrowed or reclaimed as greenspace.

Over at Sunset Beach, more and more of the parking lot gets reclaimed for other activities as time goes by. Part of the Kits north parking lot would make a great picnic area. It is nice and flat and close to the beach. Maybe it is possible to redesign the larger south parking lot to fit the same number of cars in less space.

While sadly, it is impossible to be sure how Harvey Haddon, the philanthropist who generously donated the park to the people of Vancouver, would have felt about the bike path. The deed does state that improvements can be made for people to enjoy recreational activities safely while keeping it as close to a natural state as possible. Who knows for sure but it is indeed possible if he could witness all the families cycling along the water around, that he would approve such a path.

So, instead of lawsuits, it would be great if everyone including Park Board, the City of Vancouver, beach user groups and area residents sat down to work on solutions. Lets make Kits Beach great for everyone walking, cycling, jogging, playing tennis, shooting hoops, picnicking, swinging, climbing or just enjoying the view.

Please write City Council mayorandcouncil@vancouver.ca and Park Board PBcommissioners
@vancouver.ca encouraging them to find a solution.

Even with the construction not complete, lots of people are enjoying cycling, walking and jogging along Point Grey Road giving us a small glimpse of what it will be like this summer once the separated bike lane is completed along Point Grey Road between Trafalger and Macdonald. As was the case with Burrard Bridge, Hornby Street and Dunsmuir, the traffic chaos that some predicted just did not happen.

The Burrard Cornwall intersection cycling and walking improvements are almost completed with only the bike path on the west side of Burrard left to pave. The York Bikeway is under construction and construction on the separated bike lane along Point Grey east of Macdonald should begin soon. Be careful if you check it out as there is active construction.

Without the speeding traffic, the birds, bikes and joggers now are just so noisy now!

A good idea to send a quick thank you to city council mayorandcouncil@vancouver.ca thanking them and staff for the improvements to the Seaside Greenway.

The Point Grey Cornwall Greenway will mark the completion of the Seaside Path in the West Side of Vancouver. As with the rest of the Seaside Path, every year it will be enjoyed by hundreds of thousands of residents and visitors of all ages bringing customers to businesses in Kits and Point Grey.

The well funded and organized opponents of the Point Grey Cornwall Greenway are complaining that the city is moving too fast and want them to slow down the implementation of these badly needed improvements.

Twelve years after the 2001 False Creek Pedestrian & Cycling Crossings Study recommended improvements to all three bridges, Burrard Bridge is the only one that has been improved.

So, by slowing down, what do the opponents of all ages cycling on Point Grey Cornwall mean? One year, five years, twenty years? Never? 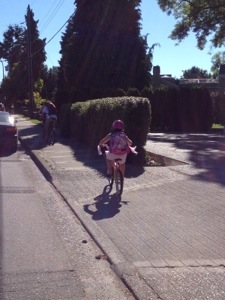 Today’s children should be able to cycle safely around the city while they are still children.

Other cities are moving way faster than Vancouver in implementing separated bike lanes that are safe and comfortable for people of all ages including children and seniors.

Seville
Seville perfectly demonstrated the advantages of rapidly building cycling facilities. In four years, they invested $42 million to complete a network of 78 km separated bike lanes throughout the city. In addition, they also installed a 2,500 bicycle bike sharing system. As a result, bicycle mode share increased from 0.2% to 6.6% and cycling trips increased from 2,500 to 70,000 per day. Perhaps more importantly, it is now quite common to see children cycling in the city.

Sydney, Australia
The City of Sydney is investing $71 million over 4 years to build a 200km cycling network including 55km of separated cycleways. Currently one per cent of trips into the city are made on bicycle – the city aims to increase this number to 10 per cent by 2016.

So, please encourage the City of Vancouver to build the Point Grey Cornwall Greenway now and speed up the implementation of other badly needed cycling improvements. Lets realize the health, safety, environmental, social and economic benefits of cycling as soon as possible! Tell them the problems that you have experienced along Point Grey & Cornwall and let them know what the Point Grey Cornwall Greenway would mean to you, your family and community.