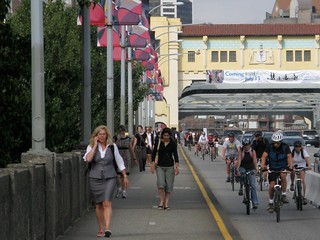 Like Loading...
On June 12, the Mayors Council release their Regional Transportation Investments, A Vision for Metro Vancouver which includes a 30 year vision and a 10-year investment program.  The 10-year program  includes significant investment in transit, cycling, walking and roads throughout the region.
The Vision calls for funding for a 2,700km network high quality bikeways including 300km of traffic-separated routes to help make cycling a real transportation option for people of all ages and abilities. The proposed investment in cycling network/routes and secure bicycle parking total $131 million over ten years, reaching $16.5 million per annum by Year 6. The $131 million consists of:

From Regional Transportation Investments, A Vision for Metro Vancouver (page A66)

One of the actions identified in the Regional Cycling Strategy is to define and implement the Major Bikeway Network (MBN) of high quality regionally significant routes that parallel and connect to the rapid transit system and regional gateways. These routes should be traffic-protected to the extent possible. Examples of specific projects that could be designated as part of the MBN are outlined below, including upgrading the BC Parkway and completing the Central Valley Greenway, North Shore Spirit Trail, Evergreen Bikeway, and routes South of Fraser to parallel future rapid transit lines.This program would augment the existing Bicycle Infrastructure Capital-Cost Sharing (BICCS) program to provide cost-share funding to support an additional 300 km of traffic-protected bikeways and 2,400 of designated bikeways throughout the region, as identified by municipal transportation and cycling plans.

Facilities would generally be constructed on a cost share basis with municipalities, but the cost share amount may vary depending on facility type and regional priority.

If we do nothing, walking, cycling and transit will only account for 27% of trips by 2045, far short of the target of 50%. The Plan will get us to 36%. It is a great start, but much more will need to be done though to met regional targets. Lets get this plan moving forward then work on meeting the 2045 targets.

The Mayors preferred choice, was for the Province to help fund the improvements through a portion of the existing Carbon Tax collected in the region then shifting to mobility pricing at some point in the future. This would increase the effectiveness of the Carbon Tax by providing more people with better sustainable transportation options. Now, the Carbon Tax revenue was used to cut taxes so essentially this funding would have come out of general revenue. The Province is projecting surpluses of hundreds of millions of dollars in the coming years. There is a strong case to use some of this to help improve transit, cycling and walking. Ontario Premier Wynne, who just scored a dramatic election win, is doing exactly that by investing $15 billion in transit around the the Toronto area in the next ten years.

Unfortunately, the Province quickly reject using the revenue from the existing Carbon Tax but left the door open to an additional Carbon Tax which, according to Premier Clark’s election platform, would have to be approved by the public in a referendum.

Support GetOnBoard BC, the coalition leading the charge for more transit funding: http://www.getonboardbc.ca