The City of Vancouver’s proposed Point Grey Cornwall Greenway improvements for Point Grey Road from Balsam to Jericho Beach will be much safer for everyone including drivers, cyclists, pedestrians, children and residents.

Although it is popular with some, on-street parking is dangerous especially for children. Removing parking, as proposed for some sections of Point Grey, can reduce all collisions by around 25%.

By providing safe space for people of all ages to ride bicycles, the planned improvements will reduce conflicts between people cycling, walking and driving making Point Grey safer, more enjoyable and less stressful for all.

Those who will likely benefit the most from the safety improvements are the residents along Point Grey, some of whom are opposing the plans. They will no longer have parked vehicles blocking their view of speeding traffic when they are pulling out of their driveways. When they are walking, there will be less risk of being run over by some else entering a driveway who didn’t see them walking on the sidewalk because of a parked van, SUV or truck.

According to the proposal, Point Grey between Trafalgar and Macdonald would be reduced to one lane in each direction. This will reduce speeding aggressive driving such as passing on the right and other lane changes. Around 4% of motor vehicle crashes occur during lane changes and merges. The road will be safer for people driving, walking, cycling and exiting their driveways.

Sidewalk cycling is not safe for pedestrians or cyclists. It is one of the main concerns of pedestrians and transit users along Cornwall and Point Grey and is not allowed under the Motor Vehicle Act. The sidewalks are way too narrow for cyclists and pedestrians to safely share. That said, it is hard to fault people with children for not wanting to cycle on the road with the speeding traffic. Sidewalk cycling has decreased by 80% on Hornby since the opening of the separated bike lanes. A similar decrease should occur along Point Grey as well.

The proposed Pt Grey improvements will increase the number of people choosing to walk and cycle instead of driving. Thus, the total vehicle kilometres travelled during a year will decrease resulting in fewer collisions, injuries and fatalities to motorists, cyclists and pedestrians.

As a result of the Dunsmuir separated bike lanes and other improvements, cycling to work is up by 40% in areas east of Dunsmuir in Vancouver. An addition 530 people are cycling to work in this part of the city. This does not include people cycling for other reasons. The increases will likely be similar for Kits and Point Grey as Pt Grey Rd and Cornwall are the missing links in the all ages and abilities cycling network connecting residents to places of work downtown.

The Point Grey Cornwall Greenway will also be very popular in the summer with many people using it to get the beaches, parks and events like the Folk Festival, again reducing the amount of driving during the times when there is the most traffic congestion on Pt Grey and Cornwall.

As shown in the chart below from Bicyclists’ Injuries and the Cycling Environment study, separated bike lanes (cycle tracks) and residential streets with traffic diverters calmed streets as proposed for Point Grey have been proven in Vancouver and other cities to be safer people cycling. These facilities are also likely to attract more people of all ages and abilities to cycling.

While it is fine to state how safe a type of cycling facility is, it is important to evaluate it along a proposed route to determine if it will be a safe option.

Point Grey Has No Busy Intersections

Little Ones on Hornby with Mom Watching from Sidewalk

Around 50% of cycling crashes occur at intersections, so routes that have few busy intersections will be safer. Point Grey has very few intersections that cyclists will have to cross so it should prove to be pretty safe.

Driveways can also be a problem for cyclists but it is important to note that residential driveways do not generate much traffic so the risk is much less than even low volume intersections. A single family house generates around 10 trips per day. There are 14 driveways accessing 15 houses on Pt Grey from Balsam to Trafalgar. This would generate around 150 trips per day. There is one townhouse with a driveway. Townhouses generate around 6 trips per day so the 8 units would generate around 48 trips a day. From Trafalgar to just passed Macdonald, there are 10 driveways serving 13 houses generating around 100 trips per day. So the total from Balsam to Macdonald would be almost 300. This is far less traffic than most residential streets and the parkades downtown accessed from Hornby generate. Given that these residential street intersections in Vancouver and driveways across Hornby cause few collisions, these driveways along Point Grey should prove to be a low risk to cyclists.

An opponent of the Point Grey Cornwall Greenway has claimed that that separated bike lanes are more dangerous based on ICBC collision data. However, what is not mentioned is that the majority of these collisions are at the intersection of Burrard and Pacific. Upon examining collisions in ICBC’s map, it becomes clear that the Hornby and Dunsmuir separated bike lanes are rather safe compared to other routes like Burrard Street. Hornby performs better than Dunsmuir perhaps because busy right turns across it are signalized. Both appear to be as safe or safer than many of the residential street bikeways around the city.

Even the comparison between the separated bike lanes downtown and Point Grey is not really valid. The separated bike lanes downtown have hundreds of thousands of vehicles crossing them per day and even then, the crash rates are not that large. As detailed above, Point Grey will only have a few hundred per day crossing the section between Balsam and Macdonald so the risk due to intersections (there are none) and driveways is much much less.

For the section of Point Grey between Macdonald and Alma, the Portside Greenway along Wall St is a good comparison should option 2a, diverting the traffic off Point Grey, be chosen. Wall is along the waterfront so it has no streets crossing it. It also has houses on the north side with driveways. The driveways likely have more vehicles accessing them as there are a few apartment buildings on Wall. Wall Street no cycling collisions reported from 2008 through 2012 perhaps the only bicycle route in the City to hold that distinction. This bodes well for the safety of this section of Point Grey.

The current Seaside Route along 3rd Avenue is less than ideal. It is narrow with parked cars on both sides creating a risk of dooring. There is little room for cyclists to get by on-coming vehicles making riding more stressful and less comfortable. Cyclists also have to cross busy Macdonald and Alma Streets. The access to 3rd Ave from the east is hilly, indirect and not obvious so people are less likely to chose it or even find it at all. The current Seaside route from Trafalgar to Jericho has cyclists crossing 18 intersections. The proposed route on Pt Grey will have cyclists crossing only one intersection, Alma. As around 50% of cycling collisions occur at intersections, Pt Grey will be a safer option.

From Macdonald to Jericho during 2007-2011 according to ICBC stats compiled by the city, there were two cycling collisions on Pt Grey Rd and four on 3rd Ave. So, even with the higher levels of automobile traffic, Pt Grey had fewer collisions. With the planned traffic diversion, traffic calming measures and separated bike lanes from Alma west, Pt Grey should be pretty safe for people of all ages to cycle on.

Some people have suggested using 1st Avenue as the bicycle route west of Balaclava with a path on the south side of Pt Grey between Macdonald and Balaclava leaving Pt Grey still open to high levels of speeding traffic. This proposal has many of the problems that 3rd currently has. Cyclists would have to cross busy Pt Grey at Macdonald then cross busy Alma and then cross Pt Grey again at Wallace. Cyclists would have to face 10 intersections on 1st instead of only one on Pt Grey dramatically increasing the risk of injury. 1st is hillier than Pt Grey and is much less scenic making it a route that cyclists are not very likely to chose. While 1st looks like a direct route on the map, the hill and all the intersections would make it a slower, less efficient and more dangerous route than Pt Grey.

Research has found cycling downhill to be more dangerous than cycling on flatter routes. Pt Grey is a much flatter route than any other options including the current Seaside route on Trafalgar, York, Stephens and 3rd.

On-street Parking is Dangerous for Everyone

Invisibility Pedestrians can be difficult to see: They are small compared to a car, and can be hidden by one. At night the problem is more severe. A parked car is the most commonly cited source of obstruction.

Parked cars are a traffic hazard for pedestrians, particularly children. Research has shown that prohibiting on-street parking improves safety. The number of accidents is reduced by about 25% in streets where on-street parking is prohibited.

Vehicle speeds were slower in the presence of occupied on-street parking bays compared to the other two environments; however, the speed reduction was insufficient to compensate for observed impairments in drivers’ hazard perception and slower response to the pedestrian in this condition.

On-street parking is dangerous for people cycling due to dooring, conflicts with automobiles pulling in or out of parking and reduced visibility of vehicles pulling out of driveways. All three of these problems exist on Point Grey Road. 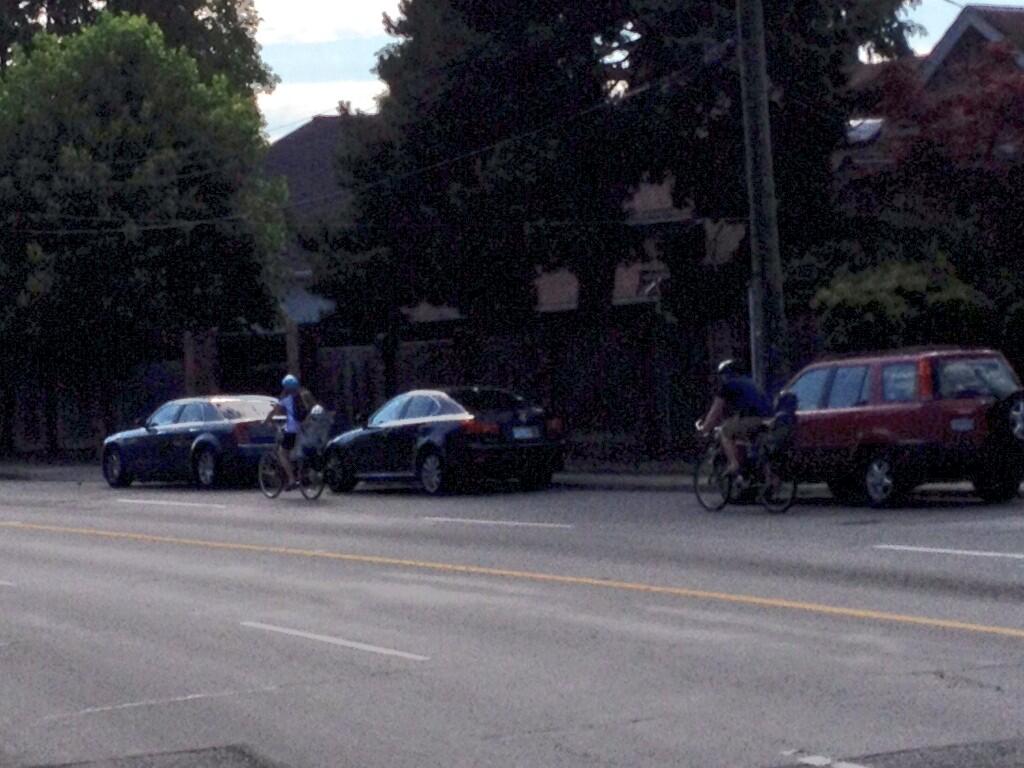 It concluded that the greatest risk to cyclists is when they share major streets with parked cars, with no bike lanes present — such as on Broadway in Vancouver — and that without a designated space on the road, cyclists face a greater risk of injury from moving cars and car doors opening.

In contrast, the study concluded, roads with infrastructure designed for cyclists — including bike lanes on major streets without parked cars, residential street bike routes, and off-street bike paths — carry about half the risk, while physically separated bike lanes carry about one-tenth the risk.

Dooring is Dangerous to Cyclists

Cyclist in Door Lane. Would Driver Have Time to React?

Almost all people cycling along Point Grey are riding in the “door zone”, too close to the parked cars to avoid being hit by a door. This is especially dangerous on downhill sections where cyclist and motor vehicle speeds are higher and breaking distances are longer. Doorings have proven tragic in Vancouver, In 2001, 40 year-old actor Keith Provost was killed riding his bicycle as a result a driver opening a car door in front of him.

Dooring is Dangerous to Drivers

Being forced to suddenly brake or swerve to avoid hitting a fallen cyclist is dangerous for motorists as well. In an attempt to avoid hitting the woman cyclist who fell off the Stanley Park Causeway, the bus skid from the curb lane to the centre lane. It is fortunately a collision with another vehicle did not occur.

Currently, parking is allowed too close to driveways along Pt Grey often totally blocking the visibility of cyclists and drivers exiting their driveway. The removal of the parking proposed in the City’s plans will eliminate this problem and make Pt Grey safer for everyone.

The sight distances along Pt Grey are far less than recommended by the provincial government.

So, please encourage the City of Vancouver to build the Point Grey Cornwall Greenway now and speed up the implementation of other badly needed cycling improvements. Lets realize the safety, health, environmental, social and economic benefits of cycling as soon as possible!

Tell them the problems that you have experienced along Point Grey & Cornwall and let them know what the Point Grey Cornwall Greenway would mean to you, your family and community.